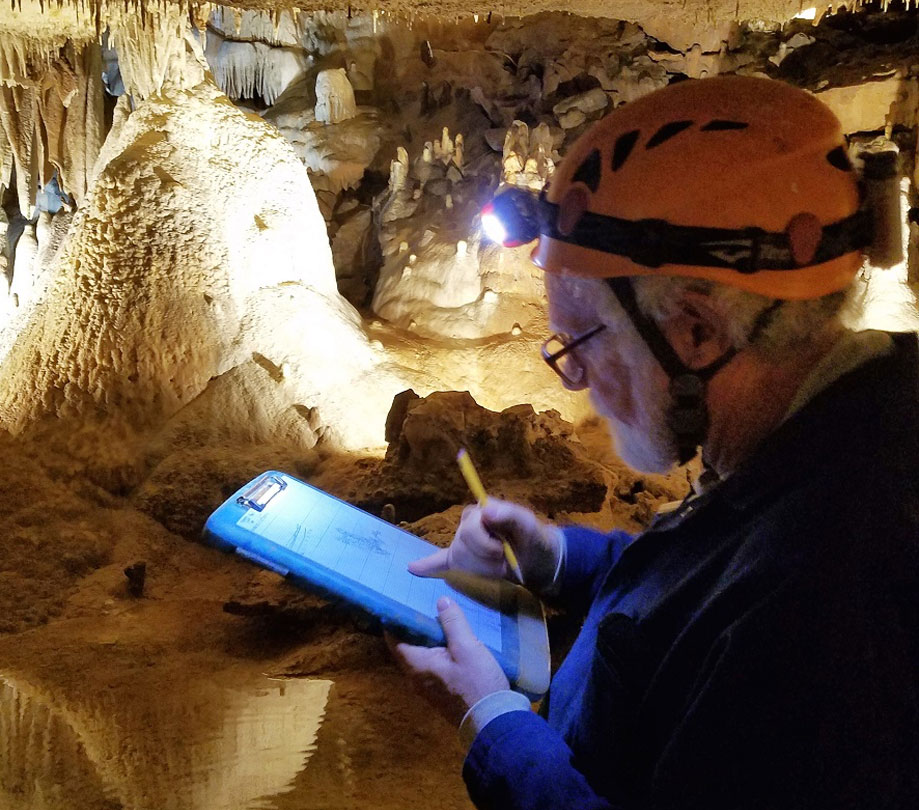 Cave mapping a cave system is no easy task, but cave maps are useful to scientists and conservationists - and to our many visitors that come to see Fantastic Caverns. Learn how our Missouri cave system was mapped to show direction, length, width, and locations of many of the cave formations inside.

Early in 2019, Fantastic Caverns was mapped. Mapping a cave is not drawing a map to the cave, like a highway map showing visitors how to get somewhere. Instead, a map has been made of the inside of the cave, showing what directions it goes, how long it is, how wide it is as well as showing the locations of many of the objects found in the cave—its stalactites, its flowstone, its large boulders, and other features. 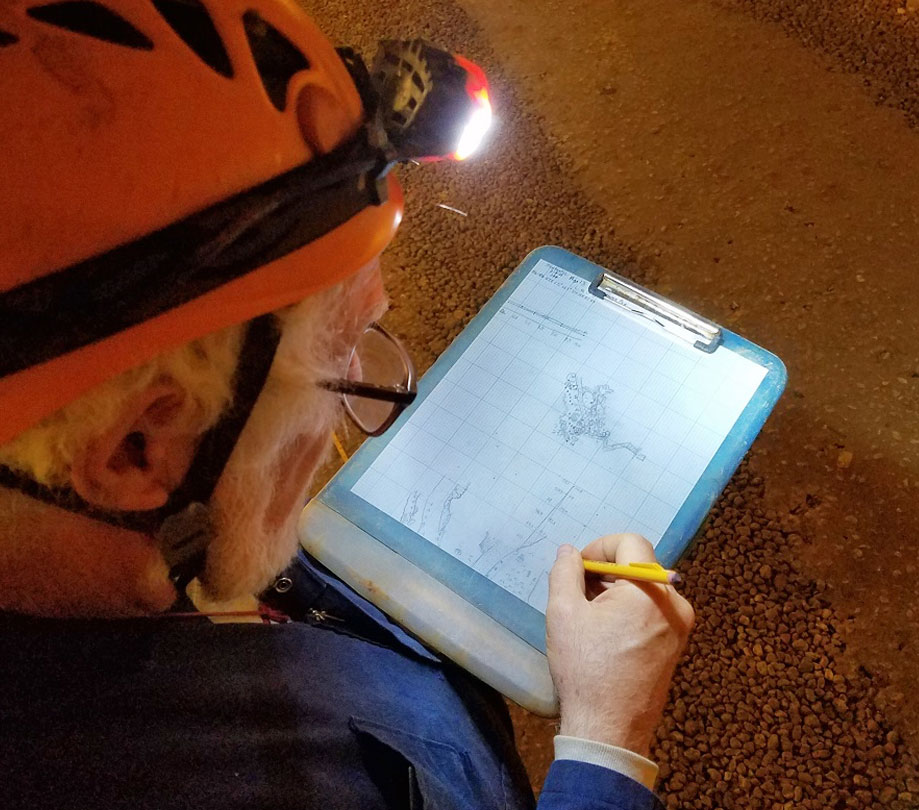 What benefits do people get from cave mapping?

A map can be used as a grid, so scientists can plot the locations of animals found in the cave. A cave map can showcase where water flows from place to place. And sometimes a map shows the shape and features found in the cave. All of these uses can help scientists figure out how water dissolved the limestone to form the cave. Scientists can study the sediments found in a cave, and plot the different sediments on a cave map to help show how these sediments were deposited by cave streams. Different sediments can be gravel, mud, silt and clay. Studying sediments can help researchers understand the history of the cave. 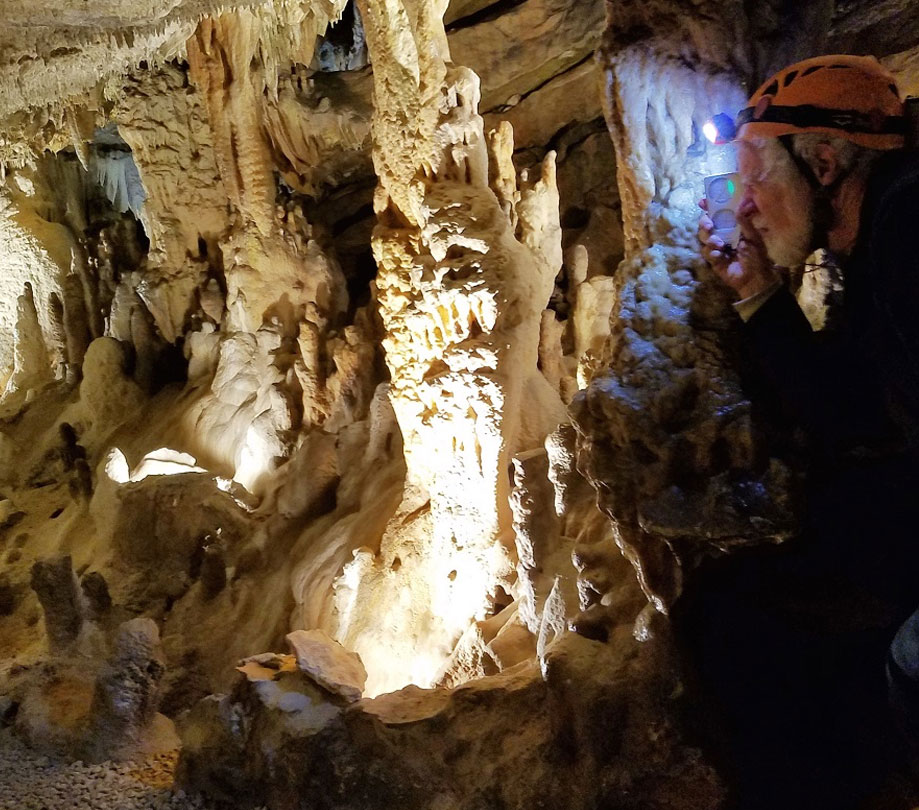 A detailed cave map takes a long time to make.

The new map of Fantastic Caverns has taken more than two months to survey and draw. It was mapped using a compass, a clinometer, a distometer and an open reel fiberglass tape rule. A compass is used to measure the direction. It is graduated into 360 degrees with north being zero (or 360 degrees) and south being 180 degrees. A clinometer is an instrument that measures up and down angles. Straight up is 90 degrees, straight down is negative 90 degrees and straight horizontal is zero degrees. A distometer is a laser pointer that measures distance to one one-hundredth of a foot. And the open reel tape is 100 feet long, divided into tenths of a foot.

The surveyor uses a gridded sheet of paper, a protractor and a pencil to plot the survey shots. Then using the survey shot, the surveyor draws all of the features found along that survey shot. Going from survey station to survey station until the cave is completely mapped. Typically in a large complex cave, like Fantastic Caverns, only one hundred to three hundred feet is mapped in a day, depending on how large the passage is and how many features it has. Fantastic Caverns’ Hall of Giants took two whole days to map! 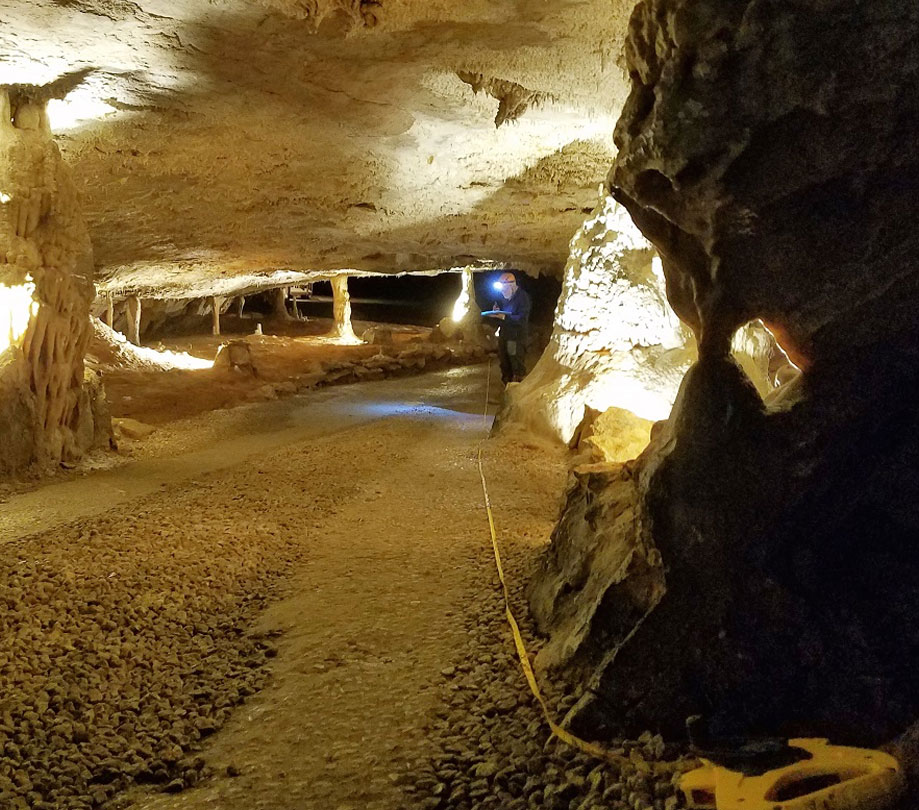 The Fantastic Caverns System is the longest known cave in Greene County with more than two miles mapped.  That is really saying something, because Greene County has about 400 documented caves! Not only is the cave a geologic wonder, but it is home to many rare and endangered cave animals that could not survive outside of caves. 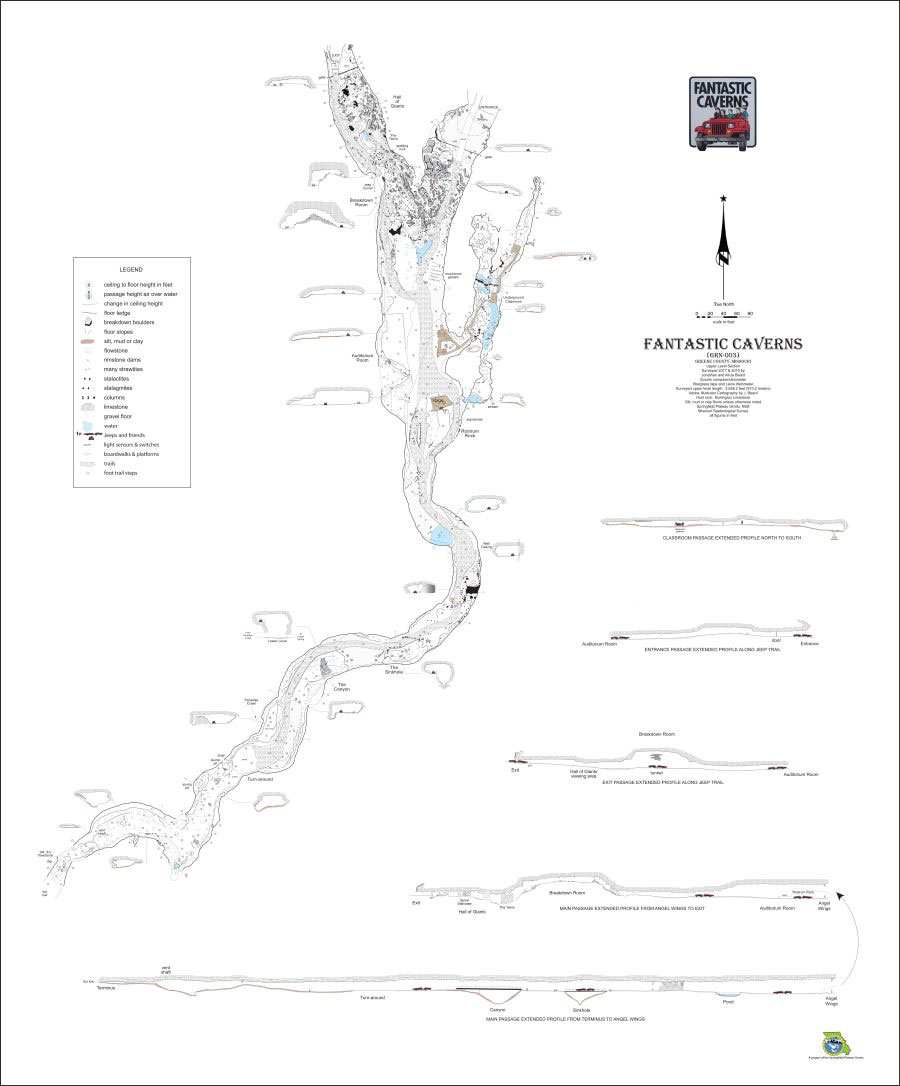 More about the survey team: Jonathan and Alicia Beard

The surveyors are a husband and wife team who has surveyed several caves in southwest Missouri. They are long-time members of the Springfield Plateau Grotto (SPG), a chapter of the National Speleological Society. These organizations are all about conserving, exploring and researching cave resources. The Springfield Plateau Grotto has several members in southwest Missouri who go caving every week. In just 14 years, SPG members have mapped more than 250 caves! Not only do they map caves, they monitor their biology, take excellent photographs and restore caves that have been vandalized. With the fragility of Missouri’s natural resources, it is important for organizations, like the Springfield Plateau Grotto, to continue this research and preservation work. And it takes many dedicated individuals to keep Missouri’s cave resources protected.

Jonathan Beard is extremely passionate about karst terrain and geology. He is a Cave Specialist that lives in the Ozarks and is involved with the Springfield Plateau Grotto.